The challenge is to reduce the enormous amount of fossil energy we use and replace it with cleaner energy. Pollution has an enormous impact on human health and the integrity of natural systems, so less of it is better for everyone. Renewable energy technologies convert energy from inexhaustible sources into electricity. The energy source in the case of solar panels (photovoltaics) is the sun, whereas the energy source for wind turbines is the velocity and mass of the wind. Conventional energy sources include fossil fuels like coal, oil and natural gas. Nuclear fuel is also non-renewable.


Another very important concern that might relate more to renewable energy technologies is the land-use where they are sited. Installing solar panels or wind turbines on grasslands has the potential of disrupting natural ecosystems. It is better to use brownfield sites (land that has already been used for industrial activities), or in the case of solar, built environments like rooftops and parking lots, for the installation of renewable technologies.


It is clear that reducing energy consumption is always the best choice to reduce pollution.

The more technical term for this is EROEI: Energy Returned over Energy Invested. A technology must have an EROEI greater than 1. If it is less than 1, that means you have used more energy making the technology than you will generate in the life-cycle of the technology. A contemporary example of this is fusion, which currently uses more energy than it generates.

Here are some examples of EROEI:

In the case of solar, the energy it takes to manufacture a square meter of panel is 1150 kWh. A kWh, or ‘kilowatt-hour’, is the same unit of energy in which you purchase your electricity. In Lethbridge, a square meter of solar panel will produce about 225 kWh of electricity each year. If the solar panel lasts its expected lifespan of 25 years, it will produce 5 times more energy than it took to manufacture it. That is an EROIE of 5.

Today, it is a process of making fossil fuels more productive. Take one unit of energy from a fossil fuel, use it to make a renewable energy technology, and generate 5 to 25 times more energy over time. Because you are increasing the efficiency of the original unit of fossil fuel, you are creating smaller amounts of pollution per kWh of electricity produced.


To expand on this concept, one unit of fossil fuel can be burned to make steam to generate electricity (at an efficiency of about 35% for coal, and as much as 50% for natural gas). This same fuel might be burned to make a renewable energy technology which, in turn, will generate energy over time. The same amount of fossil-fuel is burned in both cases, creating the same amount of pollution. The renewable energy technology will, however, produce many more times the amount of energy over time, so the pollution is, in essence, diluted. Less pollution per energy produced is the result. The following example shows how the emissions per kWh of electricity is reduced over time, compared to the fossil technologies that currently comprise the Alberta electricity system. 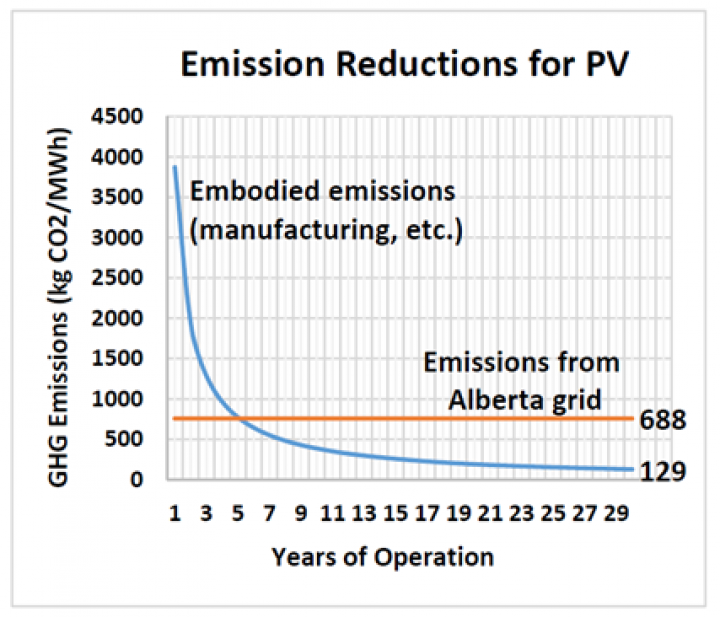 Global societies have recognized the undesirable side effects of fossil fuels (coal, gas and oil). First, the reduction of energy use is the most effective means of reducing pollution. Second is using the energy more efficiently: replacing fossil fuel electricity generation with renewable energy technologies improves efficiency and reduces pollution. It will take a monumental effort to assign our remaining fossil-fuel allowance to manufacture and install renewable energy technologies in an effort to vastly reduce fossil-fuel consumption in the future. And there will be significant challenges in designing and operating an electricity grid based on intermittent sources: a combination electricity storage and managing electricity demand by industry and households will be required. It is likely that natural gas generation will be required in Alberta as a back-up when demand exceeds generation.


In summary, when one wonders what renewable energy is today, think of it as improving efficiency (making more energy from each unit of fossil fuel energy), and think of it as a means of reducing pollution.

We live in a full world: renewable energy technologies are an existing way to do better and begin to reduce our environmental impact. 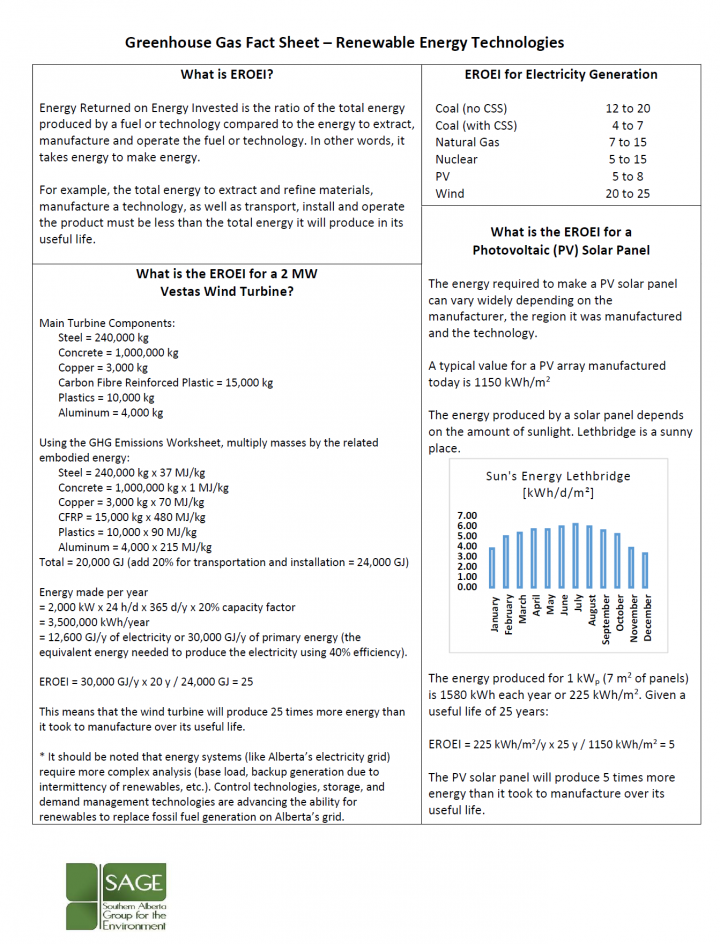